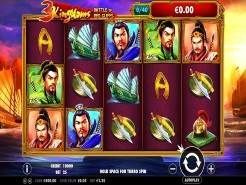 Play Now
In the ancient kingdom of China there were many battles over the different areas of the land. This slots game centers on the battle between Emperor Cao Cao, Emperor Liu Bei and Emperor Sun Quan. Players will meet the emperors on the five reels of this enticing slots game that has twenty five paylines and a progressive bonus game that gives multipliers of up to 100x.

Enjoying slots is part of the way to winning and there is plenty to enjoy in this slots game that includes a wild symbol and a scatter and a choice of bonus free spins games in addition to the Spoils of War bonus game. The wild fiery symbol substitutes for other symbols and in this way can complete a winning payline. The scatter symbol is the temple and this appearing on reels 1 3 and 5 at the same time triggers the Red Cliff bonus round.

During the base game any time the player lands all three emperors on the screen the player earns a bonus point and when he has reached 40 bonus points he wins the Spoils of War bonus game. The player is invited to choose one out of eight different envelopes that will award him anything from 2x up to 100x the coin bet placed. The 3 Kingdoms - Battle of Red Cliffs Slots game is exciting and enjoyable giving players hours of fun on this well laid out and riveting game with many historical messages.
Play Now

Where to Play 3 Kingdoms - Battle of Red Cliffs Slots